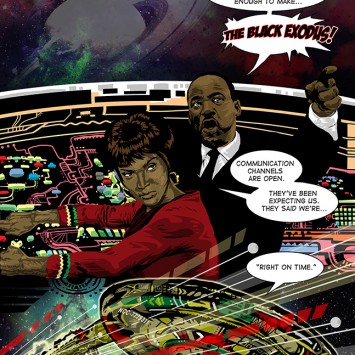 To imagine another system is to extend our participation in the present system.
—Michel Foucault

In the latter half of the 20th century, European political philosophy stopped dreaming — or at least Foucault abandoned any speculative thought of the future. He feared the unleashed imagination. And he told others not to imagine other futures. Other. Futures.

Foucault was wrong not for his critiques of power and prisons or his history of sexuality. Nor was he wrong to caution “us” about programmatic false utopias. Foucault was wrong because his “us” was that of an unthought, Eurocentric, whiteness. His all-inclusive “nous [our]” was fundamentally exclusive. [1]

Foucault did not ask the question as to whose failed utopias led to the self-imposed interdiction upon speculative futurism, nor whose collective guilt was behind the imperialistic edict that would censor speculation upon all possible, and impossible, futures.

It is one thing to caution against imposing futures because of past utopias gone bad; it is another to tell those who have suffered under past imperialistic dystopias that they have no right to dream (once again) of a future otherwise.

Foucault (and he is not alone) did not address the ways by which oppressed, indigenous, and downwardly racialised peoples have undertaken radical projects of the imaginary that, in Ytasha Womack’s phrase, “unchain the mind” (15). Such radical dreaming is not fantasy in a trite sense. Radical dreaming is the production of what Sun Ra called a “living myth.” Ra was such a living myth; he “walked the Earth” as an ancient alien pharaoh from the future. In his music, poems, and philosophy, Sun Ra described how “fantasies in a false sense” are capable of countering — like how a sound wave counterpoints its inverse into harmony — the reified myths of racialised supremacy and endgame capitalism, those “real fantasies” of white supremacy that proclaim themselves as real (14). Against such “capitalist realism” (to borrow from Mark Fisher), Ra posed the impossible demands of the radical imaginary: that of an alien black future, in tune with the cosmos. Ra was unafraid of the future because he made it his life’s work to decolonise the imaginary through the vibratory effects of intergalactic jazz. Through sonic futurism, Ra left us with a catalogue to retune the Earth. Applied sonic futurism is wielded by Ra as a weapon of materialised myth to decolonise the imagination and clear the temporal pathways for new multiverses.

What does it mean to “decolonise the imagination”?

Decolonising the imagination means undertaking radical projects of dreaming that go by many names, all signifying avenues of escape velocity from chained realities, and all of which “walk the Earth”: Afrofuturism, Black Atlantic Futurism, AfroSurrealism, Black Quantum Futurism, EthnoSurrealism and Indigenous Futurisms…. “Decolonisation,” when applied to the imaginary, demands that the speculative imaginary go one step further—into the future by way of the past. It means revisioning the past, in the act of retrieving forgotten and neglected histories, to unlock the potential of unthought futures. It means destabilising the present with chronopolitics, what Kodwo Eshun describes as mobilising “revisionist historicities [as] a series of powerful competing futures that infiltrate the present at different rates” (297).

These are not abstractions. Afrofuturism is alive and well and infiltrating your unconsciousness at untold speeds. Applied speculative futurism impossibly materialises in living myths that walk the Earth.

The Black Exodus: Right On Time

In the following interview, visual artist Stacey Robinson discusses how his work “Destination Saturn” (2015) ties into, and ultimately furthers, the science fictional imaginary of Afrofuturism by reminding “us” of the real fantasy of racialised injustice in the United States. Utilising the medium of digital graphic arts and black comix, Robinson imagines a cosmic Afrofuture free from imperialist white history. Multiple science fictional myths fuse into a single image of Black Exodus: the Starship Enterprise becomes the beacon of the interplanetary Black Star Line, piloted by Lt. Uhuru and Dr. Martin Luther King, Jr., as they make their way to the home planet of Sun Ra, Saturn.

tcV: Tell me a little about the inspiration for “Destination Saturn.”

SR: The inspiration behind “Destination Saturn” comes from my frustrations living in America, where every justice won Black people had to fight for. It also comes from my understanding that White privileges are more important to much of White America than justice, equality and diversity are. The inspiration comes from entertaining ideas of living apart from White people to examine what an uninterrupted space looks like. I wonder where Africa would be without American and European imperialism. What non-genetically modified foods would taste like. What cures would be realized. What Black love and relations would look like outside of White-dominated and distributed pop cultural depictions. I’ve often said that if I encountered a black hole, I’d enter in and leave this wickedness.

tcV: In “Destination Saturn” there are several themes at play, starting with the encounter between Nichelle Nichols (Uhuru) and Martin Luther King Jr., the latter who encouraged Nichols to stay with the Star Trek series. But there’s more here: Sun Ra comes into play, as well as The Black Exodus (thinking here of Marcus Garvey and the Black Star Line) and the phrase “Right on Time” (which I read as referencing the Nation of Islam’s “Nation Time,” as often sampled in Public Enemy…). Can you break this down for the viewer a bit?

SR: You are right on target. I wanted to mix sci-fi, politics and Black nationalism. For Black folks it’s all the same. The intersections are more than less. We’ve always been AfroFuturists. The message is very direct and those key elements to this piece makes this one of my recent favourites. Yes I’m referencing Sun Ra’s Space is the Place. We are headed to Sun Ra’s home planet, a Black marooned people free to explore our understandings without colonial interference. The Garvey inspired Pan-African Black Star Line Ship Enterprise on its continuing mission to find Black peace and boldly go where very few have gone before. If not for Dr. King, Nichelle Nichols would have left Star Trek, as she had already submitted her resignation letter to Gene Roddenberry. I’m working on my AfroFuturist book where I examine many Black figures who many wouldn’t consider AfroFuturists. Dr. King is among them, partially for this reason. I wasn’t thinking “Nation Time” when referencing “right on time” but I’ll take it. Doesn’t matter to me as long as it leads to “free-dumb.” I was thinking that no matter how late in life we wake up and seek to be free it’s always “right on time.”

tcV: What does “Afrofuturism” mean to you, in the context of your work, especially in a piece like “Destination Saturn”?

SR: AfroFuturism is Black belief system. We gave the world religion, science, technology, philosophy, all this was interconnected into the spiritual beliefs of ancient African people. It was never separated, thus why as I said the intersections are more than they are less. However we must be very serious in thinking to transform the speculative into reality. The actuality of an AfroFuture. Black people have always been here, we will always be here, but in what capacity? White people are landing on comets, colonising Mars and have always been bold in letting the world know that they are destroying this planet and leaving the remains to mostly poorer people who won’t be going to Mars when they [Whites] leave Earth. What does “Afrofuturism” mean to me, in the context of my work? It means we need to think about what our future is going to be and take charge of it. Most of our struggles for equality have led to our unravelling as a cohesive people. Integration is my best example. We are still unequal and unfree. Call it AfroFuturism, Pan-Africanism, whatever. Either way true AfroFuturists are thinking beyond the dope beats, cybernetic aesthetics and speculative fiction that we create and are actualising realistic plans of action for Black people’s survival outside of colonialism. That’s what “Afrofuturism” means to me, in the context of my work.

[1] This evidently provocative statement, writ here in shorthand, acknowledges that Foucault introduces the concept of biopolitics by discussing race and racism in his 1976 Collège de France lectures. What is in question is twofold: that (a) Foucault considers biopolitics so encompassing that it has completely colonised “the” imaginary (yet whose imaginary?); and that (b) as a consequence the biopolitical regime remains thought by Foucault in the realm of the master’s discourse. Without asking questions of intersectionality, the biopolitical regime (in which Foucault includes structural racism as a primary component) appears omnipotent to the very points of resistance identified by Frantz Fanon and later Homi K. Bhabha—radical imaginaries that arise unscripted from subject-positions that implode the dialectic of the colonised/coloniser.

Stacey Robinson is completing his Masters of Fine Art at University at Buffalo. He is originally from Albany, NY and graduated from Fayetteville State University where he earned a Bachelor of Arts. He is part of the collaborative team “Black Kirby” with artist John Jennings that creates comic books, gallery exhibitions and lectures that deconstruct the work of artist Jack Kirby and re-imagine Black resistance spaces inspired by Hip Hop, religion, the arts and sciences. His thesis “Binary ConScience” (2015) explores ideas of W.E.B. Du Bois’s “double consciousness” as a Black cultural adaptation and a means of colonial survival. In 2010, he was a part of the exhibition Invisible Ink: Black Independent Comix, at University of Tennessee at Knoxville and in 2009 he exhibited as part of Body in Motion at the Fayetteville State University Rosenthal Gallery and Beyond the Frame: African American Comic Book Artists at the Flint Institute of Arts.

tobias c. van Veen is SSHRC Postdoctoral Fellow in the Department of Communications at the Université de Montréal. Writing in both popular and academic publications, tobias’ work explores questions of race, becoming, and technology in culture, music, and philosophy. Tobias is editor of the Afrofuturism special issue of Dancecult: Journal of Electronic Dance Music Culture (2013) and co-editor with Hillegonda Rietveld of the forthcoming special issue “Echoes from the Dub Diaspora” (2015). A techno-turntablist and practitioner of interventionist media arts since 1993, tobias is also creative director of the IOSOUND.ca music label and resident DJ of Ion Storm podcast at djtobias.com. He tweets @fugitivephilo.