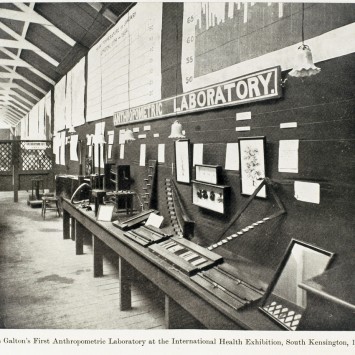 Eugenics. What does the word mean? What is its genesis? And more importantly, what is its legacy?

I write this post after a whirlwind introduction to the discipline of eugenics and its inextricable connection to our university, upon reading an article written by Dr Nathaniel Adam TobiasColeman, recently published in Times Higher Education. In a matter of weeks, I came to learn much more about the dark legacy of the celebrated figurehead in which our university takes immense pride: Francis Galton.

He is lauded as a polymath and eminent scientist who worked on biostatistics and human genetics, as well as a traveller and inventor of scientific instruments and a contributor to the subjects of meteorology and criminology. He was also the founding father of eugenics.

I learnt that the word eugenics is derived from the Greek word eu (‘good’ or ‘well’) and the suffix –genēs (‘born’), and that it was coined by Galton in 1883. I learnt that his definition of eugenics was “the study of the agencies under social control that may improve or impair the racial qualities of future generations”.

I also came to discover that a prime motivation for the research which led to many of the ‘achievements’ noted above was the motivation to determine what constituted ‘desirable’ and ‘undesirable’ traits among the peoples of the world, to legitimise the theory of racial supremacy – with the ‘Aryan’ race being the ‘master’ of all and the ‘Negro’ being the least of the ‘lesser’ – and to classify these ‘lesser’ races as non-occidental or ‘other’.

For example, Galton’s contribution to criminology is often cited because it is thought to demonstrate his relentless dedication to the perfecting of the fingerprinting process and his methodical quantification of hundreds of subjects, which led to the division of the constituent parts of the fingerprint into the arches, whorls and loops that are familiar to all today. However, the solving of crime was not the main reason why Galton had been engrossed with this research. He was desperately trying to prove that there was a correlation between ‘racial difference’ and fingerprints (he was ultimately disappointed).

This recent ‘introduction’ to eugenics was somewhat ironic, given that I am a human genetics graduate, that I have had many a lecture in the Galton Lecture Theatre and that I sat through Professor Steve Jones’ ‘Genetics 101′ lecture in my fresher year. Despite this, I graduated in 2002 without any knowledge of the Galton legacy whatsoever. It is bewildering that my fellow geneticists and I were not made aware of this history – bewildering, but not at all surprising.

Power and privilege continue to dictate the narrative of the legacy of this field of study. Although the UCL webpage that chronicles the history of Galton makes mention of the word ‘eugenics’ as many as seven times, it fails to mention the (racialised) definition of the discipline.

That is why, upon its announcement, I immediately registered to attend the ‘Eugenics@UCL’ lecture, organised by Dr Debbie Challis, Audience Development Officer at the UCL Petrie Museum of Egyptian Archaeology, and hosted during the UCLU Black History Month celebration. It was another opportunity to gain a deeper understanding.

The event took place on 10 October – exactly 110 years to the day that Galton wrote to Sir Arthur Rücker (Principal of the University of London) with an offer to fund a study of national eugenics at our university.

Chaired by Dr Challis, the conversation was opened by Katy Makin, Project Archivist in UCL Special Collections, who is responsible for managing the cataloguing of the Galton Papers, as part of Codebreakers: Makers of Modern Genetics – a major digitisation project funded by the Wellcome Trust. Speaking about his teaching of race and the sciences at UCL wasDr Lars Fischer, Teaching Fellow in UCL History. Dr Lesley Hall Fellow of the Royal Historical Society, a Senior Archivist in the Wellcome Library’s Special Collections and Research Associate at the UCL Centre for the History of Medicine, spoke about eugenics and gender.

Dr Vivienne Lo, Director of the UCL China Centre for Health and Humanity, focused on the implications of eugenicist thinking when it comes to nurturing our many Chinese students, andDr Hugh Goodacre, Teaching Fellow in UCL Economics and Senior Lecturer at the University of Westminster, concluded the discussion by recounting ‘The economics of eugenics’, with particular reference to the ways in which today’s mainstream economics is rooted in British colonialism and the British Empire.

The speakers were eloquent, informed and engaging, but, apart from the material shared by Dr Goodacre, there was a distinct absence of any reference to the clear connection between Galton’s eugenicist proclivities (institutionalised by our university) and the overt racism—especially towards those who were racialised as black—that it propagated.  I did hope that – in light of this session being hosted during Black History Month and in light of the publication of Coleman‘s article – the discourse would have addressed this head on. However, once again, I am not surprised that this was not the case.

I am sure that each speaker was fully briefed on the nature of the event. Yet there was a collective inability (or was it an unwillingness?) to appraise the material they were to deliver in a race-critical manner (race-critical analysis is something else I have learnt about in the past few weeks!).

Does this require specific training? And does, as one commentator in the film put it, “post-colonial guilt” hamper any attempt to acknowledge the history of how our knowledge is made and disseminated?

The #UCLfacesRACE series will be continuing the debate on Tuesday 11 November, this time in the Pearson Lecture Theatre, named in honour of Karl Pearson, UCL’s first Professor of Eugenics. It will ask the question: ‘Why is my Curriculum White?’. I hope that, in this second conversation, my questions and the comments in the video will be tackled…

Where does our conversation on the history and legacy of eugenics at our university go from here?

An article, just published in the US current affairs magazine National Review, has called for major philanthropic organisations that once funded the American Eugenics Records Office (an imitation of London’s Eugenics Record Office, which was created with the substantial monetary gift that Galton bequeathed to UCL upon his death) – household names such as the Carnegie Institution and the Rockefeller Foundation – to apologise. The article quotes William Schambra’s argument that these institutions should adopt an approach of “research, regret and reflection”.

Schambra argues that the foundations associated with eugenics should raise a sum of money to invite independent scholars to dig into their archives, and to locate and publish all the historical documents relating to their involvement with the movement. Once research has been conducted, foundations involved in eugenics should publicly demonstrate regret. Expressions of remorse by institutions for participation in eugenics are becoming more common, and therefore more expected.

However the author stressed that ‘whether or not regrets are ever expressed, the third component of this approach to handling past wrongdoing – reflection – is imperative, and that the organisations “should reflect on what the history of eugenics has to teach us about the dangers posed by the grand projects that seek to drive down to the root causes of social problems and solve them once and for all”. Is this an approach that our university should also adopt?

Personally, I am not seeking a show of regret, but I would hope to see a concerted effort by our university to pursue and engage the public in activities that will lead to an unequivocal acknowledgement of this history in its entirety. I would hope to see a resolution to have an open and candid conversation to reconcile our history with its present day effects.

This piece was originally published on the main UCL website