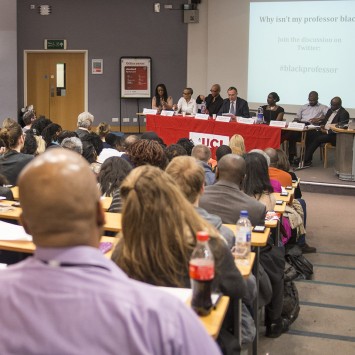 Why Isn’t My Professor Black? On Reflection

Earlier this month, University College London, one of the UK’s elite academies, hosted a public lecture with a panel of academics all responding to the question, ‘Why isn’t My Professor Black?’

Dr Shirley Anne Tate (who was in fact my Black professor in 2012), opened her short lecture by remarking that this question has “ceased to be interesting because we know that there are so few Black professors”. She encouraged the audience to do the radical imaginative work of envisioning the conditions under which our Professors could be Black, moreover Black women.

Joining her on the panel Nathan Edwards, Doctoral researcher and creator of the documentary Absent from the Academy, presented the findings of his research. He highlighted that of the 18,550 professors in the UK only 85 of these are Black (and only 17 of the 85 are women), which amounts to less than one per cent. By contrast Black students comprise 5.9% of the British student population; that’s 121, 000 Black students. To be clear: there are 85 Black Professors to 121, 000 Black students in Britain.

Taking their lead I ask, ‘Why isn’t your Professor Black?’ . The short answer is, of course, Britain’s institutional racism.

Having to shoulder the burden of proof, we as Black and Minority Ethnic communities often refer to the ‘covert’ nature of British racism. I suggest this speaks to our self-doubt, and frustration that the legitimacy of our experiences is routinely called in to question in the face of a tolerant and multicultural Britain. What clearer demonstration of this than the “I, too, am Oxford” initiative by Black students at Oxford University, a campaign exposing BME experience of racism at the institution, and the faux civility of the rebuttal staged by white students, “We Are All Oxford”.

To develop a focused and specific response we require common language that confidently disengages from a debate over the incidence of racism, and is able to describe how racism has conformed and habituated itself in our post-modern society. By indexing the racial microaggressions that – uninterrupted – become widespread oppressive white cultural practices, and by using critical imagination to propose the interventions and conditions where our Professors could be Black, we do the kind of work that is visionary and not just fantasy.

This was the mandate of the lecture and exactly what Dr Tate did in the excerpt she presented from her research “Racial Affective Economies, Disalienation and ‘Race Made Ordinary’”. She described the negative affects ‘disgust and contemptuous tolerance’ as part of exclusionary cultural practices that inhibit collegiality, and thus significantly curtail the advancement of Black staff in Higher Education institutions.

The notion of being an outsider and experiencing alienation was a recurring theme throughout the evening. Dr William Ackah explained the attitude that Black life is “anti-intellectual” persists. In corroboration of this Dr Nathaniel Coleman delivered a prolific lecture referencing the “Threat of the Orangutan” – the unspoken suspicion of the insufficiency of intelligence and imminent threat of an untamed animalistic nature contained in Black bodies. Creating a historical narrative he extended this critique to the exclusion of Blacks from philosophy both as agent and subject.

To echo the sentiments of the panellists, alienation negatively affected my experience, even as a postgraduate studying for an MA in Race and Resistance. I attended The University of Leeds on a scholarship for academic excellence, but by the end of the year my confidence had been injured and I had real doubts about progressing my career.

Living and studying in all-white spaces as a marginal body affects the psyche, but ultimately it was the feeling that my experiences and expertise were not welcomed that deterred me. After missing a seminar due to illness my lecturer said to me “it was really good when you weren’t here”. Those words stuck with me for the duration of my degree, and to be frank, still taunt me now.

In context, she was explaining that my absence was beneficial to the two white students in the class who had less knowledge of the subject. Nevertheless, it remained with me that even on a Black studies course there was an implied hierarchy. As Nathan Edwards writes:

With no Black or Asian lecturers on the course I quickly intuited that there was a particular kind of white liberal knowledge production I would need to participate in if I wanted to succeed.

I don’t wish to universalise my experience and I am wary of presenting anecdotal evidence. As a friend and colleague I sought Nathan’s advice about how much of my experience I should disclose. He said something important: “We have the statistics and they are damning. The quantitative evidence exists, but our experiences are important too. The problem is insidious. It’s the qualitative research that’s interesting because that’s what makes meaning of the numerical data.”

Why isn’t your professor Black? At the student level (in addition to alienation), I can attest to uncertainty about a Professor’s career pathway, a great financial investment without a definable return, and a lack of financial assistance – even after spending thousands of pounds to do my Master’s degree I had to sign up for job seekers allowance, and work at a call centre for minimum wage; before eventually securing a job completely unrelated to my interests and specialisms. I abandoned the track of an academic because I saw more of the costs than the fulfilments of an academic life, and because I remain ambivalent about what life as an academic really constitutes.

It is likely we could come up with an exhaustive list on why there are so few Black professors. More importantly however, I believe that strategic interventions which take place in partnership with universities can significantly improve this. Moreover, it is evident that there are communities of interested people willing to do the radical imaginative work that underpins that change. Perhaps in years to come I will be the Black woman, accomplished professor, teaching you.